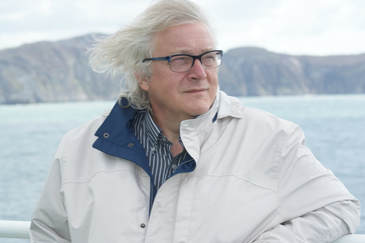 Hayden Trenholm is a produced  playwright and published author.   His plays have been produced in the Northwest Territories, Alberta, British Columbia and Saskatchewan and on CBC radio.   In 1993, his play, Man of No  Name, was a finalist in the Theatre BC play competition and, in 1994, he won the 28th Alberta  Playwriting Completion with The Book of  Rose.  In addition to six stage plays, he wrote and acted in over forty-five interactive murder mysteries for Pegasus Performances, appearing across western Canada and, even, in Las Vegas.

Hayden Trenholm’s short  fiction has appeared in Analog Science Fiction and Science Fact, On Spec, TransVersions, Tesseracts6. Neo-Opsis, Challenging Destiny, Talebones, a number of anthologies and on CBC radio.  His short stories, "The Luck of Willie Lumen," "Like Monsters of the Deep" and "Lumen Essence" were  nominated for an Aurora Award (Canada's SF Awards) in 2005, 2006 and 2007 respectively. In 2008, after a record fourth consecutive short fiction nomination, he won the Aurora for his novella, "Like Water in the  Desert."  In 2011, he once again won an Aurora for his short story, “The Burden of Fire.” His third Aurora for short fiction came in 2017 for the novella, "Marion's War", published in the Stranger's Among Us anthology from Laksa Media.

His first novel, A Circle of Birds, was published by Anvil Press in 1992.  His novel, Defining Diana, was released by Bundoran Press in 2008 and was nominated for an Aurora Award in the long fiction category.  The second and third books of the series, Steel Whispers (2009) and Stealing  Home(2010) also received Aurora nominations. Stealing Home was a finalist in the 2011 Sunburst Award.  He  edited a short fiction anthology, Blood and Water, for Bundoran Press. It was launched at When Words Collide in Calgary in August 2012 and won the Aurora Award in 2013 for Best Related Work. In 2013, a
​French language version of A Circle of Birds was published by Les Allusifs. In 2014 he edited Strange Bedfellows, an anthology of political science fiction, subsequently also nominated for an Aurora Award. In 2015, he joined forces with Michael Rimar to edit Second Contacts, which won the Aurora Award for Best Related Work. In 2016, he and Mike edited another anthology, Lazarus Risen.  In 2017 he edited 49th Parallels: Alternative Canadian Histories and Futures.

In April 2021, he self-published In the Shadow of Versailles, the first of a series of mystery noels set in Paris between the wars. The second book, By Dawn's Early Light, will be published in October, 2021, with the third planned for the middle of 2023. He also published Let Me Gather My Thoughts, a collection of essays, in August, 2021. A new science fiction novel, The Passion of Ivan Rodriguez, will be published by Tyche Books in 2023.

In December 2012, Hayden purchased Bundoran Press and became its managing editor, continuing to run it until its closure in October 2020.

Over the years, Hayden has taught writing at the University of Calgary, the Alexandra Writing Centre, several public libraries and at the University of Northern BC.  He is a frequent participant at Science Fiction conventions across Canada and in 2012 was Author Guest of Honour at CanCon in Ottawa.  He returned to CanCon as Editor Guest of Honour in 2013. In 2014 he taught a two-day Master Class in writing in Yellowknife and in June of the same year returned to Yellowknife as a guest of the NorthWords writing festival. In 2018, he was publisher guest of honour at Limestone Genre in Kingston, Ontario. He provides professional mentoring and editing advice to a number of students, though he retired from freelance editing in October 2021, though he continues to accept the occasional mentoring and ghost-writing contracts.

In 2022, Hayden was inducted into The Canadian Science Fiction and and Fantasy Association (CSFFA) Hall of Fame.

He lives with his wife and fellow writer, Liz Westbrook Trenholm, in Ottawa, having retired in 2017 after 15 years as a policy advisor to the Senator for the Northwest Territories.